It was all the better that I tried this recipe out on a Saturday morning when the whole family gets up a little later, which means I had some leeway for the experimentation I wanted to get in and it wasn’t a matter of having to get it right first time because everybody’s rushing off to work (hubby) and school. I could very well have tried it out for the very first time during the week because this is quite an easy pancake recipe which has worked out perfectly each subsequent time I’ve made it.

So I emphasise eggless just because I wanted to add a bit of variety to the breakfasts we often have, but this works particularly well for those who have an egg allergy, especially if it’s an egg allergy you’ve developed after having already had a taste of just how delicious pancakes can be…you’re welcome!

The utensils and measuring instruments I use for all my baking (although these are to be griddle fried) were all passed down from my grandmother who bought them in the USA and brought them across the border into Canada, so I inherited the use of US measurements since we in turn brought everything over from Canada when I was knee-high. I’ll tell you; these things are built to last because I still use grandma’s baking utensils.

So anyway, I reckon it’s all the better since this recipe represents typical US portions and yields up to twelve pancakes, a perfect number for my big family of 7 since one or two tummies always want seconds. So the ingredients are:

2 and a 1/2 teaspoons of baking powder

Seriously, it’s as easy as mixing the whole wheat flour, all-purpose flour, sugar, salt and baking powder into a large bowl (large enough so that you have no problem mixing everything in) and stirring. Stir in the bananas and milk, only until the mixture is slightly moist.

Oil the griddle lightly and heat (you can also use a frying pan) on medium-high heat. Now scoop (you should be able to pour it as well) the batter in amounts of around 1/4 of a cup to brown on both sides for each pancake.

Serve hot with whatever toppings you enjoy your pancakes with. You’ll notice that this is one of the healthier pancakes to make, so you might want to keep things as healthy as possible using something like honey with low-fat butter instead of something like full cream butter and syrup. Either way, enjoy and there are many different ways you can experiment to get slightly different outcomes, like perhaps adding nutmeg, cinnamon, allspice and cloves.

The pancakes should have a fluffy appearance if done right, but you can also use overripe bananas, in which case the pancakes will have a little bit of browner appearance. 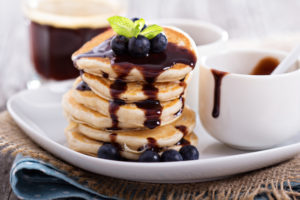